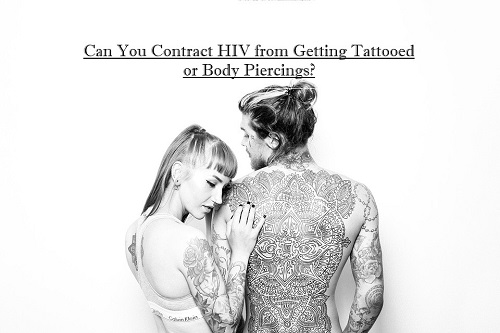 Body art has come a long way, transforming into a popular trend among young adults. As this art form of expression becomes mainstream, it makes body art enthusiasts feel more prone and vulnerable to health risks. Whether it poses a risk for blood borne diseases like HIV and Hepatitis C or infections. Considering how both procedures draw blood, the concern appears to be quite reasonable.

How Blood Borne Disease and Infections Get Transmitted

As you may know, tattoos are made by injecting the ink into the dermis that lies beneath the first layer of our skin known as the epidermis. The process is done with the help of a machine that punctures the skin at different speeds and with needles of different sizes. In contrast to that, body piercings are done with a single needle; where the skin is punctured.

As an outcome of the skin that was broken, theoretically different infectious diseases can be passed down from one person to another if these guns and needles have not been disinfected adequately. It all comes down to the integrity of the person doing it.

What Are the Chances of Transmission?

As per the Centers for Disease Control and Prevention, the risk HIV poses on individuals getting tattooed is considered as low to almost negligible. There might be a theoretical risk of the transmission but there is yet to be a documented case where the individual catches HIV or any other infectious disease through different forms of body art.

Read more: Amazing Things To Do In Virginia

Here are a few conditions in which the transmission is more likely to take place;

When it comes to body art, the chances of these conditions occurring and making an impact on the individual are slim. The possibility of an infection entering another person’s body is not as near strong as drugs being injected into the vein through the same medical instrument.

Despite the negligibility of the concern, some individuals and artists remain cautious of the concern. There was an incident reported regarding a 27-year-old who requests to get tattooed was refused due to him being HIV positive. As a result, lawsuits were filed against the tattoo salon within the same year. The 27-year-old won the case, as the court cited that due to the negligible risk of the infection the action of tattooing would not have harmed the artist in any manner. Hence, giving no reason to shun it.

However, it has been suggested by several different sources including tattoo design Inc. to avoid unlicensed or informal artists that have no prior training. The list includes gang tattooing, tattoos that are done in prison, and piercings that are commenced between friends. These are all red flag situations, not because they will land you in your worst nightmare but because they hold a higher risk of infectious diseases being transferred.

Especially when it comes to prisons, tattoo designs are punctured into the skin by random objects such as staples, ink tubes, paper clips, and even ballpoint pens. These items are not meant to be instruments for body art, and the fact that they are never disinfected is a good enough reason to avoid getting under the procedure. Which leads to a heightened risk of infections. Even if HIV is ruled out, it would be difficult to deduce whether the disease was due to body art, injection, or unprotected sex.

Irrespective of the setting and circumstances, unsanitary practices of body art inherently increase the threat of blood-borne illnesses, mainly hepatitis B and hepatitis C.

In case you are thinking about getting tattooed or getting a piercing, you should communicate with the artists and look into the procedures they use for the infection of disease transmission. You may even ask the artist to follow a sterilization process in front of you, to ensure that you are in safe hands.

You can even choose to get in touch with the local health department to find out more about safe tattoo and piercing practices that have been implemented by the law. For example, some states have prohibited tattoo parlors to pierce and tattoo minors without the permission of their legal guardians.

Whatever you do, make sure you have researched and evaluated the safety of the procedure before undergoing the process.